On the walk up to Kawasan Falls in October 2012, in Matutinao, Badian, Cebu, Philippines. 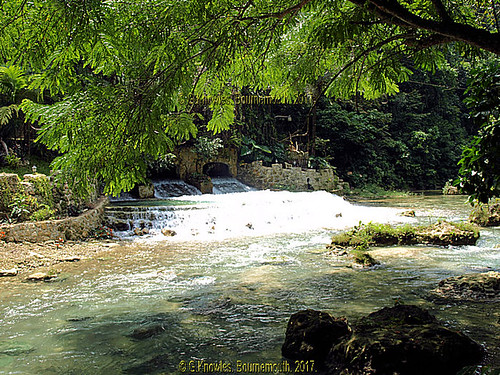 Badian is a 3rd class municipality in the province of Cebu, Philippines. According to the 2010 census, it has a population of 37,699 people. The Municipality of Badian is located 97.6 km southwest of Cebu City. It is bounded on the north by the municipality of Moalboal; on the south by the municipality of Alegria; on the east by the municipalities of Dalaguete and Argao; and on the west by Tanon Strait.
Badian is administratively subdivided into 29 barangays.
Alawijao Balhaan Banhigan Basak Basiao Bato Bugas Calangcang Candiis Dagatan Dobdob
Ginablan Lambug Malbago Malhiao Manduyong Matutinao Patong Poblacion Sanlagan
Santicon Sohoton Sulsugan Talayong Taytay Tigbao Tiguib Tubod Zaragosa
The Kawasan Falls is a three-layered waterfall series located in the Municipality of Badian, Cebu, which has become a huge attraction with foreign and local tourists throughout the years. The first waterfall is the largest and highest of the three falls, while the two falls uphill are smaller.
Kawasan Falls is located in Barangay Matutinao in Badian, Cebu. To get to Badian from Cebu City you can take a bus at the South Bus Terminal for a three hour ride that will directly take you to Badian. From there, you can take a tricycle that will take you to Barangay Matutinao.
If you are taking a private vehicle, drive past the Municipality of Carcar, and upon reaching the Municipality of Badian through the picturesque mountain road, then drive to Matutinao village. You can always ask for directions from people along the way if it is your first time to go to Kawasan Falls, so you won’t get lost.
When you reach the main road leading to Kawasan Falls, there is a main entrance to the waterfalls area and an entrance fee of 10 peso’s per person. From there, you start on a 20 to 30 minute walk on a trail that will lead you to the first waterfall.
You will then have to trek a further 10 to 15 minutes uphill to get to the second waterfall, and another 15 minute trek to the third waterfalls. There is a resort with restaurant at the area of the first waterfalls. There are small cottages and tables for rent at 300 peso’s each table as at September 2012 ( on top of the menu prices ) and several rooms for rent for those who want to stay overnight. A popular attraction is a bamboo raft ride leading to a shower under the cool falling waters of the first and second waterfall.
The Mactan International Airport is located in Mactan, Cebu; it is served by major airlines like Cebu Pacific Air and Philippine Airlines. You can also fly from Metro Manila to Cebu. There are many domestic flights and sometimes it is economical because many airlines offer a cheaper airfare. Check also for any available promo. If you arrived earlier in Cebu, you can leave straight to Badian providing you already arranged your accommodation there before your arrival or you can stay for a night in Cebu City and have your trip to Badian the next day.
Your choices to come from Cebu City to Badian are: from the airport you can take a taxi to South Bus Terminal look for Ceres Bus Liner via Barili, you can also take Librando Trans. There are buses leaving Cebu City to Badian every 30 minutes or one hour. It will take 2-3 hours or more bus travel to reach Badian from Cebu City depending on the number of stops. You can also hire a taxi at the airport or at the city to Badian, it is more comfortable and faster. Make sure the driver knows where Badian is. The fare is about Php 1500.00 – Php 3000.00 and be prepare for some bartering and some hidden costs
The capital barangay of Badian town is Poblacion. It is located in the centre of the town. This is where the local high school is located called Badian National High School ( BNHS ) is one of the two high schools in the town of Badian. This is also the largest of the two and many students from the neighbouring town just like Moalboal, Alcantara and Ronda come to study in this high school. The lower educational facility in Badian is the Badian Central Elementary School where all the younger children go to school for the simple fact that it is completely free and the only elementary school and the biggest one in town. One more very important institution that is located in Poblacion is the Town Hospital where everyone from every other barangay goes to in the time of sickness.
The facility has been better than the past management they have more improvements to the hospitals than anything else which is the best thing they could have done because this is where most Badianganons run to in the time of need. This is also the location where the town church is located ~ the church of Santiago Apostol, which celebrates its Festival on the 25th of July every year. Together with the Feast of Santiago Apostle is the Banig Festival which was started about three years ago. Poblacion is also where the Municipal Hall is located in sitio sawang. Thus, I believe that the municipality should ought to have more funding’s in the Hospital Facility more so that the roads that they are trying to fix every single year Poblacion has many sitios which is the little corners of Poblacion which is residential or commercial properties. Some of these sitios are; Syma, Walog, Sawang, Highway, and many more. This is the only urban place in Badian compared to any other barangays that surround the town. Poblacion is also the most populated barangay in all Badian. Which has 3854 population as of 2007 Census. Poblacion is where the marketplace is located. Thus, most of the trading is here. Many vendors from all over town will show up mostly on Saturdays and Sundays for the trading.